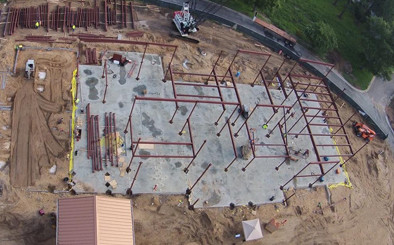 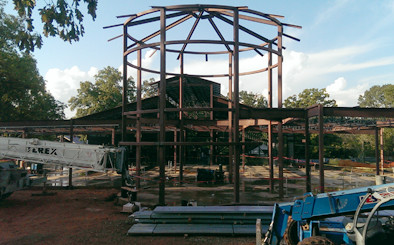 Universal Steel has been a family owned steel fabrication company since 1966. The company has grown from a supplier and installer of ornamental iron to the home building industry to one of the premier fabricators and erectors of structural and miscellaneous steel in the southeast.

The three men ran Universal Steel from the shop in Decatur. The business developed into projects with a structural nature. Universal Steel would fabricate a stair and handrail project and the contractor would ask them to fabricate the small bit of structural steel associated with the project. The scope continued to grow and so did Universal Steel.

In 1980, Universal Steel moved to Lithonia, Georgia, the current location of the headquarters. The move was necessary for two reasons. One, the Decatur location was being taken by the city because they needed the land for a new road. Two, the company had grown too big for the little ornamental shop that had served the men so well from the beginning.

Brad Bourne became President of Universal Steel in 1989, and Bill Noethling became the Executive Vice-President that year. The company continued to grow in size and in project requirements. Universal began to take on larger projects.

In 1999, the third generation arrived at Universal Steel when William B “Bray” Bourne IV started as assistant project managers. Universal Steel, by that time, had again grown too large for its current location, and in 2000 purchased the building adjacent to the Lithonia plant.

This growth allowed for the structural shop and the miscellaneous shop to be in separate buildings. This addition allowed for additional sales and Universal Steel grew from a local fabricator to a southeastern fabricator.

The American Institute of Steel Construction certification process was completed in 2003. Universal Steel joined an elite group of fabricators whose quality meets the high standards of the AISC. The certification completed a long anticipated move into more complex structures.

In 2004, the last of the third generation William I. “Will” Noethling III started with Universal Steel as an assistant project manager. That same year, Universal purchased Duluth Metal Products, a long time sub vendor in Buford, Georgia. With the addition of this shop Universal Steel became a complete one stop source for all fabricated steel products required in a building. Universal Steel has the ability to provide the structure, stairs, handrail and any other miscellaneous item on any project.

In 2005, Russell Blocker started with Universal Steel as an assistant project manager. He is the brother-in-law of Will Noethling and the son-in-law of Bill Noethling.

The addition of Universal Steel of North Carolina further expands the Universal name in the southeastern market. Large projects draw upon the resources of all four Universal plants for more control during the project and a more consistent result.

Universal Steel is a well established family company with over 200 years of combined experience in its offices. Universal Steel has worked to help build many buildings over the years and is excited about the work to come. The company is proud of its history and looks forward continuing into the future.

Find your drawings here. Login to open your DropBox folder with USI.

If you don't have a login please contact your USI representative and request one.